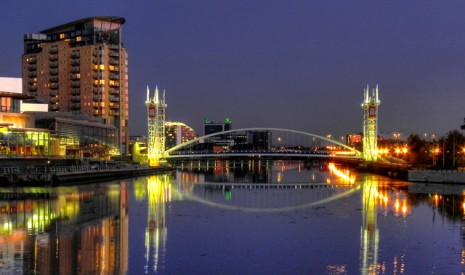 “It’s grim up North,” is a phrase that many people who rarely venture further north than Watford still try to pass off as a statement of fact. But it appears that the North may be a better place to settle down after all, as new surveys have revealed Northern cities as some of the happiest to places live.

Each year the Economist Intelligence Unit conducts a Global Liveability Survey, which looks at numerous factors such as healthcare and crime in order to rank the world’s cities in terms of their liveability. While a UK city didn’t reach the top spot, Manchester, the Northern capital, came 46th on the list for 2015, which made it the highest ranking UK city, beating London which came in 53rd.

But that’s not all. A separate survey conducted by property search engine Rightmove asked nearly 25,000 people to rate how happy they were with the area they lived in. Each participant was asked to rate their town or city on 12 distinct factors: decor, space, contentment, value, area upkeep, community, pride, costs, safety, amenities, recreation and neighbourliness. The results were then collated to find out where the happiest Britons call home. Out of the 5 top spots, 3 of them were located in the North of the country. Harrogate came in first place, with Shrewsbury and Ipswich taking second and third, but York and Chester took the remaining two spots.

The people truly have spoken, so there is now no denying that the North is a fantastic place to live. With the government’s plans to invest more into the region through the Northern Powerhouse initiative, a bright future lies ahead. If you are looking for somewhere to settle down, read on for our reasons why you should make the move north.

London is infamous for being a concrete jungle. A criss-crossing network of train lines, roads and skyscrapers with little pockets of green scattered about, there’s no denying that you have to travel pretty far out of your way in order to get some good old fresh air. While the same may not ring true for other areas in the South, Cornwall and Kent spring to mind, the North is a great example of where concrete meets countryside perfectly.

Take Leeds for example. A thriving and vibrant city filled with people, cars and buildings, but travel 20 minutes in any direction and you will find yourselves in the lush rolling green hills of Yorkshire. Whether you’re purchasing a flat in the city centre or a house in the quieter suburbs, you are never far away from a little bit of peace and quiet.

Those who have been through the mortgage application process already, and even those who have just strolled past the window of their local estate agent, will understand the current situation surrounding house prices. In a nutshell, they are pretty high. According the Office for National Statistics, the average UK house price in March 2015 stood at £273,000. But if you’re looking to get more building for your buck, then the North is definitely the place to be.

The average price for a house in London in March 2015 towered over the national average at a whopping £498,000, almost half a million pounds for a house. However, if you turn northwards and look at the North West, Yorkshire and the North East, the average house price for these three regions stands at £175,000. Not only is that £323,000 less than the Big Smoke, it’s almost £100,000 lower than the national average. That’s a huge saving, and one that could be enough to convince many people to make the move.

The history and culture

London may be the capital, but exploring the Northern cities is often like stepping back in time - in a good way. Every major town and city in the North is steeped in rich wondrous history. The key player in the infamous War of the Roses which took place between the Houses of Lancaster and York, the iconic Hadrian’s Wall and the trails of the Pendle witches in the North West, there’s plenty to explore. Castles and historical cities are around every corner, from York to Chester, and cathedrals abound, there’s plenty of history to sink your teeth into.

The Northern culture is also something well worth making the move for. This part of the country is heavily invested in sports such as rugby league, football and cricket, has produced some of the world’s most famous bands like the Stone Roses, Arctic Monkeys, The Beatles and the Smiths, and has some of the most vibrant areas, Manchester’s Northern Quarter, for example. It’s all very cosmopolitan in the North these days you know.

The places to see

You’ll never be short of things to do in the North. Whether you prefer a stroll out to the countryside or shopping to your heart’s content, there’s something to satisfy everyone. The Peak District and the Lake District are two of the country’s most beautiful spots, with lakes, forests and wildlife; the perfect spot for a picnic. For the shopaholics out there, the Trafford Centre on the outskirts of Manchester and The Trinity in Leeds should be enough to satisfy any spending spree. Other day trips include a trip to Liverpool to visit the docks, or a day out at the Chill Factore in Manchester - the possibilities are endless.

These are just four reasons why you should make the North your permanent home. Should government promises come through regarding the Northern Powerhouse, the area is only going to grow. If economic security and a rich history wasn’t enough, we haven’t even touched on the food, the friendly people and the stunning coastlines. Have we convinced you to make the big move up North? Why not check out local mortgage advisers in your favourite Northern city? We promise you don’t have to put gravy on everything, although it is highly recommended and you’ll be judged if you don’t.