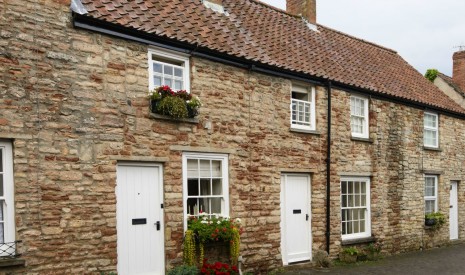 Houses come in all shapes, sizes and ages. There are big ones and small ones, old houses and new houses, and one of the first decisions you will have to make when it comes to choosing a house is whether you opt for a new build or something a little older. But which should you choose?

Recent figures from the Office for National Statistics have shown that growth in the construction industry for the second quarter of 2015 was flat. With improvement slow in the building sector, it’s a concern that the number of new houses entering the market could drop. So what if you turned your attention elsewhere, to something a little older?

A fireplace from an era long past and a big old tree at the bottom of the garden; older homes come with personality oozing out of every nook and cranny. But just like with every major decision in our lives, buying an older home comes with its advantages and drawbacks. So with that in mind, and with the knowledge that the number of new builds being completed could drop, we take a look at what to expect when scouring the property market for your dream purchase.

These days, houses are built with speed and convenience in mind, and with plenty of modern features and amenities. While this is great in some respects, it can also come with its downsides. Older houses come with plenty of gorgeous details; stunning original fireplaces, sloping ceilings, wooden beams and crown moulding in the corners, whereas new builds often look like blank square canvases. And then there’s the area itself, an older home will have both the look and feel of a cosy neighbourhood, as opposed to a new build where the charm has to be built from scratch. Of course, these characteristics can be replicated in a new build to a certain extent, but there are some things that money can’t buy.

New homes are built with the latest energy efficiency codes and standards in mind; they are all incredibly well insulated and double-glazed windows are expected. This means that they can be significantly cheaper to run than older homes, which may not come with all of these energy saving features. Of course, there are ways to make your homes more insulated and energy efficient, but these are an added expense you will have to fork out for later.

Back in the day, families were much larger than they are now, and they used to build on bigger plots of land, which gives you plenty of space to play around with. If you’re looking for a long-term investment with a few extra bedrooms to fill up with kids in the future, an older home will be right up your street.

As they were built years ago when land was plentiful and therefore cheaper, older homes often come with larger gardens attached, particularly at the back. If you have kids or just love to have a green space to potter around in, the prospect of a bigger garden is a difficult one to ignore.

Despite everything getting smaller (phones, laptops, cars), we seem to own more stuff now than ever before, and one of the unfortunate characteristics of an older home is the storage issues that may come with it. Newer homes come with modern installations whereas older houses come with all sorts of quirky features from sloping floors and ceilings to imperfect edges that may cause problems when it comes to adding storage for all our beloved items. While this may not be that big of an issue in the beginning or for younger people, it is certainly something to think about if you plan on living in an older house for the long term.

Generally, the purchase prices of older houses tend to be lower than that of new builds, although this isn’t always guaranteed. Because they have been standing for much longer you can often snag them at a cheaper price. This will always depend on the condition of the house you are buying, exactly where it is located and the recent selling prices of any houses in the area, but you may find that a modern house with three bedrooms costs far more than an older home with the same features.

Unfortunately, the money you save on the deposit for the house and your monthly mortgage payments may have to be reinvested in the house itself. Older homes tend to come with older plumbing and wiring systems and many need remodelling or redecorating depending on the previous owner. While this may not necessarily be a drawback at present (if it isn’t broke, don’t fix it), you might face added costs in the long run.

Unfortunately, often due to factors such as location, older homes may be subject to unusual charges either during or after the buying process is completed. One of these such charges is Chancel Repair. Following the dissolution of monasteries under the rule of Henry VIII, land was divided up and houses that are located close to churches, as older builds often are, may be subject to charges for the upkeep of the church. Most parishes do not enforce these rules and, because the laws are so historic, many councils are still only able to charge in shillings! Quirky old laws such as this aren’t going to deter most people from buying a home, but it’s important that you’re aware of the rules nevertheless.

There is no denying that buying an older home comes with its drawbacks, but you’ll be surprised at the amount that also go hand-in-hand with purchasing a new build. Sometimes it’s a matter of practicality; do you need more space or do you consider yourself a minimalist? Or sometimes it all comes down to aesthetics; are you looking for a house filled with rich character or would you prefer a blank canvas to start from scratch? Buying a house is one of the biggest and most daunting tasks you will ever undertake, so think long and hard about what your priorities are so you can start shopping for your dream home.